PROFILE: Brendan Jackson – out to conquer the cosplay universe

Digital arts honours student is making a name for himself in the South African cosplay community and has dreams of competing internationally.

In his latest YouTube video, Brendan Jackson (22) greets us with his signature catchphrase – “My name is Jax, and I do cosplay!” – and invites us into his studio to watch how he crafts a cosplay costume from scratch.

Cosplay is the practice of people dressing up as their favourite characters from books, movies, tv shows, comics and video games. Many of these people (known as cosplayers) meticulously self-craft these character costumes and props (collectively called cosplays) completely from scratch. 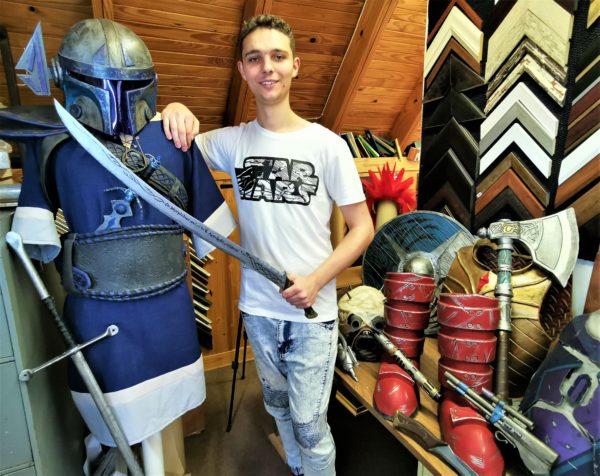 Brendan Jackson in his studio with a collection of cosplay costumes and props which he crafted by hand. Photo: Matthew Nijland

Jackson’s YouTube channel, Jax Cosplay, is dedicated to teaching viewers how to handcraft their own character cosplays through step-by-step tutorial videos.

“I primarily started the YouTube channel to teach other people about how to make cosplays [by] showing them how I made [my own costumes and props],” says Jackson.

“I always cosplay characters that I love [and] have a certain connection to, or characters whose costume designs really speak to me,” says Jackson.

His sister, Charmaine, says that Jackson spends most of his free time at home working on his cosplays. “Whenever we’re looking for him for something, we check the studio first because chances are he’s busy stuck in his work up there,” she says.

According to Jackson, cosplays can take up to several weeks or months to complete. His most complex cosplay build to date is Lord Elrond from Lord of the Rings, taking him a total of 151 hours to complete.

“Jax puts extreme care and effort into everything he makes and doesn’t shy away from different [cosplay] genres, making him a ‘Jax‘ of all trades,” says Mosca. “I can confidently say that he’s one of the best cosplayers South Africa has to offer.”

Jackson, who is a digital arts honours student at Wits, says that his love for cosplay, which began in high school in 2014, influenced him to study digital arts. “I am currently doing a research project in relation to participatory cultures and fandom, and cosplay is a huge part of that. When I saw that topic was available for the project, I knew it was the one for me,” he says.

Every year, millions of cosplayers all over the world – including Jackson – proudly wear their self-crafted cosplays to popular geek conventions, where they enter into cosplay competitions and compete in the hopes of winning best overall cosplay at the event.

Jackson started his competitive cosplay career in 2015 when he entered as a beginner into the rAge Expo cosplay competition held in Johannesburg, dressed in his self-crafted Star Wars Poe Dameron costume.

“I want to one day win South African championships hosted by Comic Con Africa, and then subsequently represent South Africa at the international Global Crown Championships of Cosplay held in Chicago,” says Jackson.

Watch a tutorial video from the Jax Cosplay YouTube channel below: