Through her ‘books as lewks’ movement, this week’s cool kid, Mbali Sebokedi offers an unorthodox take on literature through make-up.

Sebokedi is currently working on her Masters in Literary Theory at the University of Pretoria. Her thesis is based on analysing motherhood and the portrayal of mothers in relation to Africa, using three African novels as a framework.

Her movement started during the first phase of covid-19 lockdown, when the ‘Books as Outfits’ hashtag started trending on Twitter and Instagram. She tells Wits Vuvuzela that she wished to participate, however, her closet consisted mainly of blacks, greys, and blues, so “A friend suggested why not use make-up?” which she immediately took to. 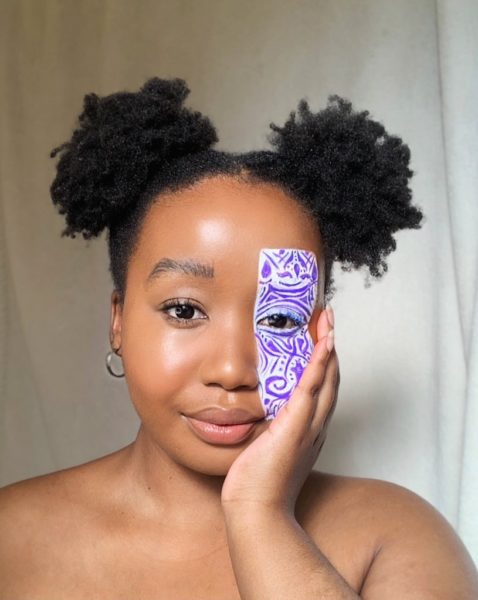 Mbali converts Beasts made of the night by Tochi Onyebuchi into make-up look. Photo: Mbali Sebokedi

Sebokedi won a competition in 2019 and the prize was a make-up kit, since then she had been looking for ways to be expressive with all the colours in the kit,  and ‘books as lewks’  was the perfect way to experiment.  ‘Books as lewks’ is a twist on traditional book reviews, where one uses book covers as inspiration for make-up looks.

“The book covers guide me when playing with colour,” she says. “I wanted to try something new, hoping that it will work, and it did”. She thought that the trend would be a one-time thing, but people started asking for the next review and next look and the movement gained traction. She started with approximately 1000+ followers and now has over 5000 on Instagram, with over 100 posts under her tag.

Sebokedi mentions that her process involves reading books weekly, sometimes monthly, depending on her schedule. She then writes reviews on the book accompanied by a make-up look that depicts the cover.

Her literature palate is now more diverse and inclusive. However, she points out that most of her reviews are based on books written by authors in the African diaspora, women, and writers in the LGBTQIA+ community. When asked why her reviews are mainly on African literature, she mentions that during her undergraduate years as an English literature student, the curriculum centred Eurocentric and western writers. African literature was only covered briefly in the academic year, but that discovery opened up a new world.  “The stories were relatable and better, and I enjoyed seeing myself in the characters,” she says.

As a book enthusiast, Sebokedi has difficulties choosing influential and significant books to read and review. However, Under the Udala Trees by Chinelo Okaparanta has made it to her list of favourite books, she said it brought tears to her eyes within the first 20 pages. Those who live in cages by Terry-Ann Adams is also on the list. In her book, Adams centralises Eldorado Park and the coloured community, “I realised I hadn’t read any fiction centring the township and its residents” she comments.