REVIEW: I Am All Girls

This Netflix thriller aims to address a series of long-term issues that trouble not only South Africa, but the entire world.

The film, directed by Donovan Marsh, was released to Netflix on May 14, 2021 and features Hlubi Mboya-Arnold and Erica Wessels as the joint leads.

It follows police detective Jodie Snyman and forensic detective Ntombizonke Bapai as they attempt to bust a long-running child trafficking ring. The film is inspired by true events, in particular a rumoured confessional tape by Gert van Rooyen, who is said to have kidnapped six girls before he was arrested in 1994.

I Am All Girls opens with a taped confession by a character named “Gert de Jager”. It then follows up with a combination of present events, and past occurrences, as the two detectives work to reach their objective. 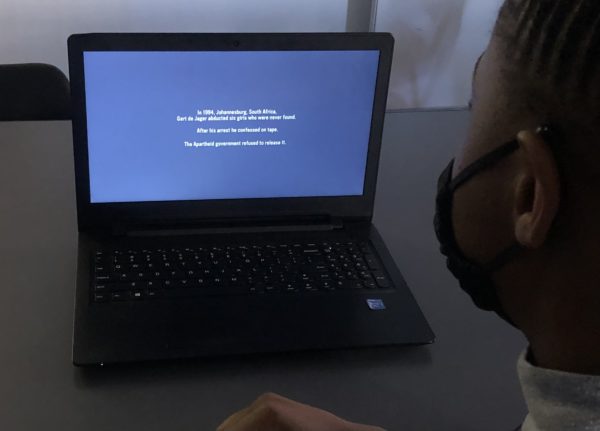 A student watching the title card of the film.
Text reads: In 1994, Johannesburg, South Africa, Gert de Jager abducted six girls who were never found. After his arrest he confessed on tape. The Apartheid government refused to release it. Photo: Rebecca Kgabo

Due to some of the themes addressed and depicted in the film, such as child trafficking, sexual abuse and the exploitation of minors, sensitive viewers and those who may be dealing with past trauma are advised not to watch the film, or to watch it bearing in mind that a significant portion of it portrays scenes that might be triggering.

On the film’s production, many of its scenes are brilliantly shot and composed, which draws viewers in almost immediately. There is a pale blue-grey filter over most of the shots, which dulls down the entire production. This, however, plays into the thriller aspect of the film.

The show boasts compelling acting, with actors such as Masasa Mbangeni, Mothusi Magano and Brendon Daniels joining Mboya-Arnold and Wessels as they tell viewers the story of Jodie and Ntombizonke. The film also stars young actors Leshego Molokwane and Nomvelo Makhanya, who play vital supporting roles.

In terms of the plot, I Am All Girls is incredibly engaging in the first 40 minutes, although after a major plot twist the rest becomes predictable and somewhat stale. Many of the scenes and scenarios are recycled versions of fight scenes and plot points common in American thrillers. This is somewhat disappointing, considering that I Am All Girls is an hour and 47 minutes long.

As a whole the themes that are addressed, as well as the visual composition of the film, make up for its predictable moments, and the cast does a wonderful job of carrying it. The film is a bearable way of passing one’s time, since it sends its message across in an entertaining manner.

FEATURED IMAGE: Movie poster for I am All girls Photo: Instagram