Johannesburg Metrobus services are still suspended as a result of a major strike by the Democratic Municipal and Allied Workers’ Union of SA (Demawusa), which began on May 3, 2021.

Despite the loss, Shivuri says that commuters will be credited for trips that expired during the duration of the strike, and that bus fare rates aren’t going to be increased too drastically when they are adjusted in the new financial year, which begins on July 1. “The strike has no bearing on issues of fees and all that. That is decided at council.”

Metrobus filed for an interdict at the Labour Court against Demawusa to force the union to end the strike and allow Metrobus drivers to return to work. The matter was heard on Thursday, May 27, but judgement was reserved.

This was the second attempt for an interdict, after the first was struck off the roll because it was deemed not urgent at the time.

Stephen Faulkner, Demawusa’s secretary general told Wits Vuvuzela that the union’s next step will be determined by the outcome of the interdict.

In a statement posted on the Metrobus Twitter page on May 25, the company said that Demawusa’s decision to strike was not in the best interest of all workers, but rather a result of very few ex-employees who “wish to have their jobs back through the perpetuation of violence and in blatant disregard of the interest of the masses of citizens who depend on Metrobus for transportation”.

In response, Faulkner said the union isn’t motivated by anything other than ensuring that all workers are treated as equals. He says that the union is flexible with its demands and is open for further talks with Metrobus.

Faulkner says that 30 to 40 of the union’s 257 members are actively participating in maintaining the strike action. He says because many of the union’s members have dual membership with bigger unions such as the South African Municipal Workers Union (Samwu) and Independent Municipal and Allied Trade Union (Imatu), that confuses the total membership number.

Although the union is small, Faulkner says that Demawusa isn’t a sweetheart union, and they would like to be recognised as equals, since they are fighting for a cause that will benefit all the workers at Metrobus.

“You can’t quite put a price on workers saying: ‘We have had enough, we are not going to tolerate this anymore, you better change the situation!’ because that makes sure that in the future, we do even better,” Faulkner said. 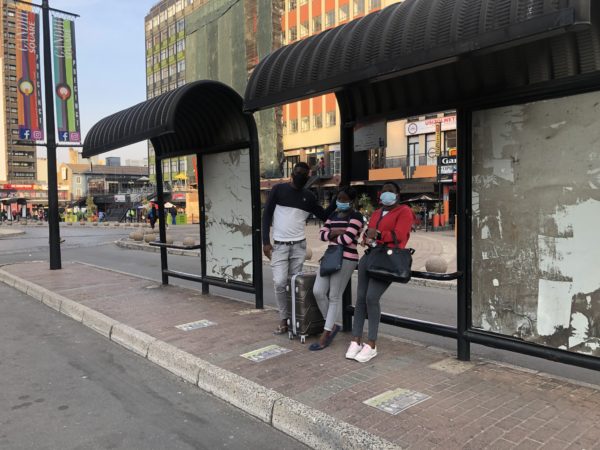 Three travellers who were not aware that the strike was unresolved wait at the Metrobus depot in Gandhi Square. Photo: Rebecca Kgabo

Demawusa submitted a strike notice on March 10, with a list of 24 demands, ranging from a pay increase of 18% and a R150 daily travel allowance for staff who don’t have access to the staff bus, to investigations into some managers and directors, as well as investigations into Metrobus itself. The union also demanded the reinstatement of all employees that were dismissed after 2016.

Shivuri said that Metrobus still has no plans to engage with the union since it only formally represents 1,4% of the workforce. He says Demawusa’s demand for ex-employees to be re-employed was somewhat of a concern because, “We don’t know if these are truly the 1,4% who are threatening the staff, or if it could be the outside group, which we do not know where they are,” he said.

Instead of negotiating, Metrobus is looking at alternative ways to ensure that services resume as soon as possible, hopefully this week.

Wits Vuvuzela student journalist, Kemiso Wessie, is one of a small number of students who made use of the Metrobus after the intense covid-19 lockdown regulations. She says that she noticed that the Metrobus website has been down for a long time, which is inconvenient because the company now uses Twitter to communicate. “Most [bus] riders may not have Twitter or even smartphones and it’s just a lot of admin to be constantly checking Twitter to see what’s happening with a public transportation system that isn’t supposed to be complicated,” added Wessie.