Workers at South Point go on strike over salary increases

The workers are dissatisfied with their current salary and demand that their salaries be increased to R12  500.

Cleaning and maintenance staff at South Point’s student accommodation buildings have been on strike since Wednesday, September 1, 2021, over demands for salary increases and insourcing, and are vowing to continue with the industrial action indefinitely if their demands are not met.

Members of the General Industrial Workers Union of South Africa (Giwusa) want a salary increase to R12 500, the insourcing of cleaning staff, housing and transport allowances, a thirteenth cheque and payment towards medical aid.

South Point says the demands, which would amount to R20 000 per worker, are unaffordable.

According to a statement released by South Point, the company says that they have agreed to meet some of the workers’ demands, including the payment of outstanding TERS (Temporary Employer-Employee Relief Scheme) money, the internal advertisement of job vacancies, and the provision of changing rooms and canteens.

South Point also says that the payment of the workers’ February 2021 bonus money had been postponed and will be paid out this month. The company says that some of the other demands are impossible to meet given their financial sustainability.

The striking workers are not buying the explanation.

John Khori, who works as a maintenance worker for South Point and among the strikers, says he earns a monthly income of only R2 000. 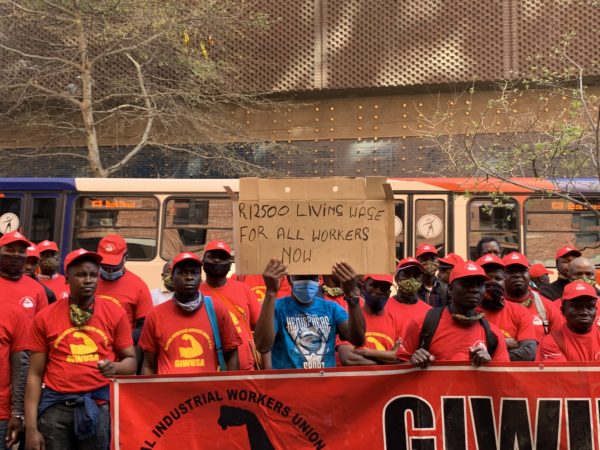 The workers are demanding for their salaries to increase to R12 500. Photo: Karabo Mashaba.

The demonstrators, in their red regalia, were chanting their demands and singing struggle songs. They plan to continue their strike until South Point gives in to their demands.

Giwusa’s president, Mametlwe Sebei, told Wits Vuvuzela that workers are not the only ones being exploited by South Point, but students as well.  “South Point is a slum lord that is doing the dirty work of the management of the university. They are subjecting students to extortionate rates in appalling conditions because they want to cut the costs of hiring cleaning staff,” he says.

Sebei said South Point receives a large portion of their income from universities due to NSFAS and other bursary payments. The union is therefore calling on university management to intervene.

Wits responded, saying that they are only responsible for accrediting the accommodation buildings for students. The university’s communications manager, Shirona Patel, said issues of payment were between Nsfas and students.  South Point did not respond to an emailed request from Wits Vuvuzela for comment on the union’s allegations.

Jabu Ncube, a South Point tenant and Wits law student, described the situation at the South Point residence where she lives as “really bad.”  Maintenance issues, such as access to hot water, have not been fixed. Ncube said there was also a lack of cleaning services since the start of the strike, and nobody to report these issues to.

“Since the start of the strike, they changed the FDOs [Front Desk Officers] and replaced them with private security,” Ncube says to Wits Vuvuzela.  Ncube said that last week, angry protestors had prevented people from entering or exiting the residence.

Members of striking union Giwusa plan to deliver a memorandum of their demands to Wits University management.