Teams and spectators are invited to the 16th edition of the Ashies tournament after it was cancelled in 2020 due to the covid-19 outbreak.

The Ashraf Lodewyk Memorial Basketball Tournament (Ashies) returns to Hall 29 at Wits University from April 25 to May 2, 2022, after covid-19 halted the tournament in 2020 and 2021.

Ladies second team coach and tournament organiser, Manyani Maseko, says “Every year is special because every year we celebrate his life and legacy, and his contribution to basketball is so special. This year adds flavour because it’s the tournament’s sweet 16 which was supposed to be in 2020. Everyone comes to remember and celebrate Ashraf. It is a place where old and young ballers come together.”

Ashies is set to host approximately 30 teams in a men’s and women’s league. Gauteng clubs, universities and high schools have been invited to participate with registration closing on April 15. Maseko said that fixtures would be released closer to the tournament. 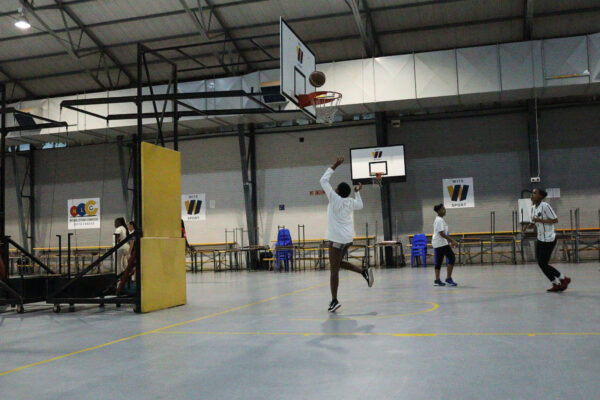 The Wits second team in practice for the Ashies. Photo: Tylin Moodley

The tournament will comply with the university’s covid-19 policies which apply to both players and spectators. Anybody attending the event will be required to produce a vaccination certificate at the university entrance. Spectators are expected to pay an entry fee at Hall 29 which goes towards fundraising for the club.

For ladies second-team captain Ofentse Magabeane, the return of sporting activities is “amazing as covid took away the opportunities to play, which is something that affects student athletes.” The third-year digital arts student has not participated in a Wits basketball tournament and is “excited to show her skills and hopefully lead her team to great results”.

Third-year biomedical science student and first-team player, Ncumisa Madolo, has played in the tournament before when she joined the team in 2019. For Madolo, Ashies is a tournament where people with the same love for basketball come together, something she gets to experience again.