About 100 Wits engineering students got to dream about possible future careers in space exploration after listening to a former National Aeronautics and Space Administration (Nasa) deputy chief technologist, on Tuesday, May 3.

Jim Adams, who was part of more than 30 space missions, including the landing of the Curiosity Rover on Mars in 2012 and the probe mission to Pluto in 2015, gave a lecture to promote Science, Technology, Engineering and Mathematics (Stem) education at the South West Engineering Building.

The recently retired technologist used to direct missions to space and advocated the use of new technology while at Nasa. He told students that the future of space exploration is “strong” because of the many upcoming projects around the globe such as the Square Kilometre Array (SKA) and ATLAS Telescope in South Africa.

The SKA project, near the Karoo town of Carnarvon, will have numerous dishes that can monitor the sky at a faster rate to observe and learn about space in greater detail than what is currently possible, with space observations set to take place in the late 2020s.

The ATLAS Telescope in Sutherland, Northern Cape, which brought Adams to South Africa for the first time in 2013, is a warning system for potential asteroid impact on Earth. 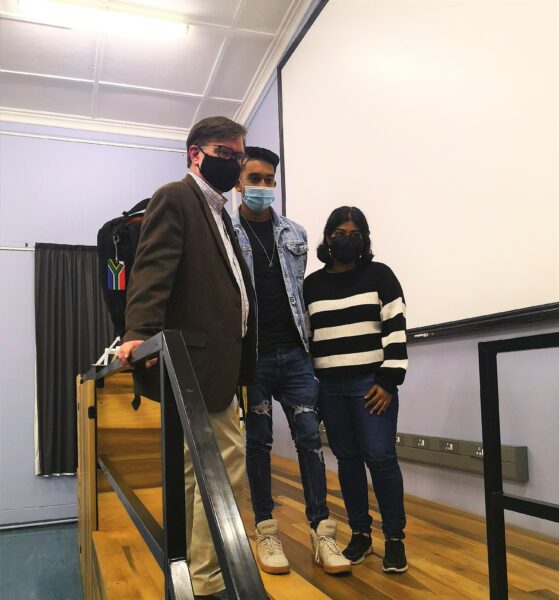 When asked by students what qualifications should be considered if they want to pursue a similar career as him, Adams replied that there is “no secret code”. He studied a BSc in physics and an MSc in electrical engineering while other people took different paths. However, he did encourage students to study algebra.

Speaking to Wits Vuvuzela after the lecture, Wits engineering lecturer Michael Boer said students could learn from and “enjoy the stories from the actual guy that sent machines to Pluto, Jupiter and Mars”, adding that “Jim is the equivalent of an engineering super-hero.”

For engineering student Arya Sinha, the lecture was inspiring as it enabled students to see the things they could one day be part of. “It gave me a renewed pride in my university and the subject I’m studying. Sometimes it feels like a lot of effort for nothing… Having someone like that speak to us in person, directly, was incredibly inspiring. It was crazy that these things are real projects that we may one day be a part of, and they aren’t so sci-fi anymore.”

Ernest Khathutshelo Tshivhase from the public affairs section of the US Embassy, told Wits Vuvuzela that the lecture was organised by the US government and US Consulate General Johannesburg to “build relationships” between South Africa and the US.