The fuel price will increase for the fifth time this year, which will further place the entire Wits community under increased financial pressure.

The price of petrol is set to increase yet again next month ⁠— which will leave many people, whose finances have been battered by the pandemic, including the Wits community, in a further financial bind.

The recent increases in the oil price coincides with the war in East-Europe between Russia and Ukraine, which started in February 2022. The turmoil in the area has resulted in the destabilisation of oil supply ⁠— as Russia is one of the largest global exporters of this commodity and has been sanctioned by many  Western countries. 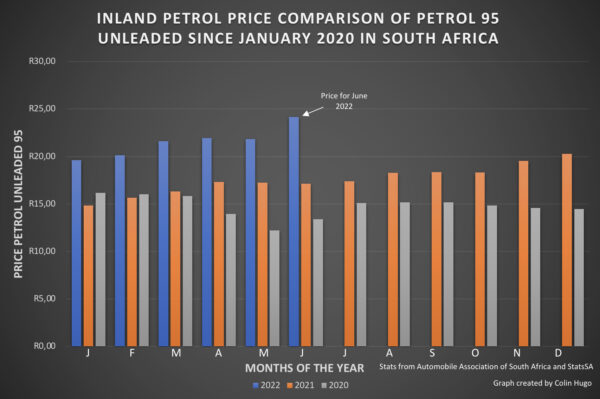 Bar graph showing the differences in fuel prices since the start of 2020 for each month of the year. Graph: Colin Hugo

The sharp increases have left the Wits community with no choice but to adjust their budgets to maintain their living standards. Students that spoke to Wits Vuvuzela said they have to plan their travels more stringently in order to save.

Sphesihle Ntshingila, a third-year computer science student, only goes out one Saturday a month and makes sure he covers all his errands in this trip.

Dario Luis, an honours student in molecular medicine, organises his tutoring jobs closer to where he is going and said he “[stays] extra time [at tutoring] so” to avoid driving in heavy traffic.

Matt Synders, a third year BCom general student, said his family had to “increase the budget for food expenditure,” due to price increases. This is because food prices respond positively to any shock from oil prices.

Wits Vuvuzela student journalist, Busisiwe Mdluli, who commutes, said a taxi costs around R800 a month to make her five-kilometre return trips to campus, at the current fuel price.

Second-year BCom accounting student, Dimpho Makhafola said taxi prices haven’t changed much despite the increases in fuel prices this year, as various taxi associations had increased fares at the height of the pandemic. Now, “they [taxi drivers] are sceptical to change [the prices] again,” he said. Thabiso Molelekwa, the national spokesperson for South African National Taxi Association (Santaco), said to The Citizen, ”There’s definitely going to be an increase in taxi fares.”

Nimisha Naik, an economics lecturer in the school of economics and finance, said that all sectors of the economy have been impacted by the fuel price increase. However, students are directly impacted by commuting to and from campus. Naik added the movement of global tax prices on imports could also increase textbook prices, further impacting students’ finances.

Naik said that it is also difficult for Wits staff because although their income stays the same, “prices all go up then that means your real income is actually decreasing.”

For students driving to Wits each week, they say they use an average two tanks of fuel a month. Now filling a 60-litre car twice a month will cost R2900,40 this is a difference of R273,60 per tank since the start of the academic year. This is a monthly increase of R547,20 in fuel expenditure if you fill two, 60-litre tanks of fuel. 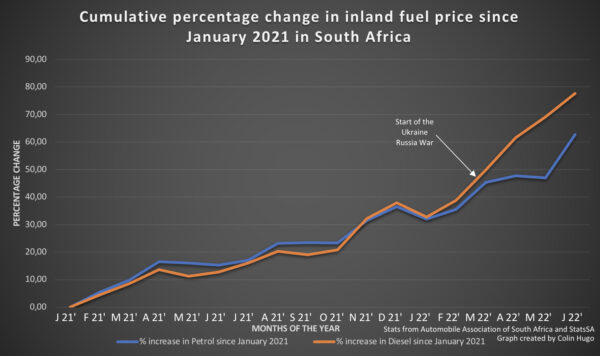 Other students have considered using alternative transport methods but said the transport infrastructure in Johannesburg is inadequate for their needs. Luis said that he would like to use public transport but worries about his safety. Michael Kourie, a third-year construction studies student, said his family has considered selling his car to get a new economically viable one.

*Story has been updated since publishing to reflect finalised figures released by the National Treasury and the Department of Mineral Resources and Energy on May 31, 2022.