A local animated film depicting the KhoiKhoi story gets recognition in New York.

The short film, From the Cave’s Mouth, by Jeani Varty, an animation trainer at Tshimologong Precinct in Braamfontein, is being screened at the 29th annual New York African Film Festival (NYAFF) running from May 13 to June 2, 2022.

This year’s NYAFF used the theme Visions of Freedom to portray “notions of freedom pertaining to Africa” through film screenings, educational programs, and discussions with filmmakers, at the Film at Lincoln Centre in New York.

From Cave’s Mouth is a three-minute film that follows a Khoikhoi family who leave the comfort of their cave in search of a family member who had not returned from his explorations. After many years have passed, a child enters the cave in modern times and learns about his Khoikhoi heritage through the paintings on the cave wall.

The film was created in 2020 for an animation jam (a challenge where animators create short videos with a given time and theme) under the theme “legacy”. Director and writer of the film, Varty wrote the Khoikhoi story as being a “culture is in dire need of preservation as it is one of the oldest spoken languages”. 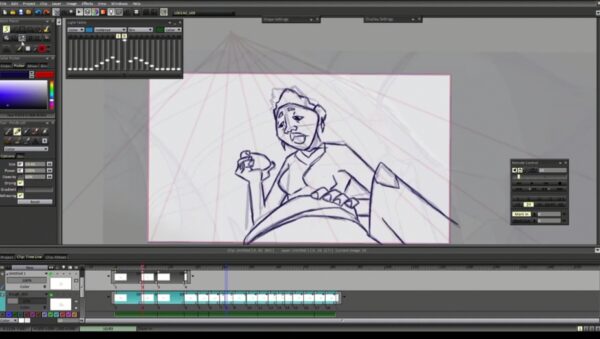 The creative process behind the character design in From the Cave’s Mouth as shown in An Introduction to 2D Acting by Lesego Vorster. Photo: YouTube

From the Cave’s Mouth got international attention at the Barnes Film Festival in the United Kingdom (UK) and the Los Angeles Rocks International Film Festival (LARIFF). It made its New York debut on May 13, 2022, as a part of African film recognition.

The film’s “rare language” and “unique art style” aligned with the Visions of Freedom theme, as the Khoi and San are indigenous Africans who were affected by settler-colonialism. “Media that caters to under-represented cultures and traditions need to be made so we can elevate them to centre stage.”

Katherine Whitton, a fourth-year postgrad in education at Wits University, said she was surprised as “short films that explore under-represented cultures…don’t tend to get international attention”.

Voice actor of the film, Denver Toroga, said the film’s international status “is just such a historical moment, something that should have happened ages ago”.

“I am excited to think that I was part of what really is the first Khoikhoi…film from South Africa being showcased at an international film festival.”

Toroga added: “Khoikhoi is not just an ancient African nam (tongue), it is also one of the world’s origin languages to hear the sounds…with the visuals, becomes an experience.”

He believes Khoikhoi people are made to feel “as if our tsub (trauma) is not ama (valid). To have this film on a global stage in New York at an African centred festival during Africa month is just correct.”

FEATURED IMAGE: The Khoikhoi family leave their home in search of their family member in the short film From the Cave’s Mouth. Photo: YouTube.