Productivity is a prerequisite for functioning in this fast-paced world, but when obsessing over it becomes a measure of one’s success, it can quickly become toxic.

The covid-19 pandemic, and a series of global lockdowns, moved the in-person work environment online. Businesses, schools and institutions that once bustled, went quiet. For many, the hustle had just begun as remote working caused the home-work line to become increasingly blurred.

A 2021 study conducted by Yonder Consulting, showed that of the 1 031 South African employees surveyed, 80% worked from home, many of whom saying their productivity had increased by doing so. This was the case for me.

I initially saw Wits University’s 2020 move to remote learning as a break from my class schedule, and thoroughly enjoyed the comfort that it brought – attending classes from bed and spending all day in slippers. This changed when I fell for today’s glamourised narrative of “hustle culture”.

Hustle culture glorifies the busyness of life and defines success by ceaseless work, where doing activities other than work is deemed as being lazy. It encourages a lifestyle of “workaholism”, a phrase coined by psychologist Wayne Oates to describe “the compulsion or the uncontrollable need to work incessantly”, according to assistant professor of psychology, Malissa Clark. “Toxic productivity” is synonymous with these terms.

A Johannesburg-based counselling psychologist told Wits Vuvuzela that toxic productivity takes the form of “behavioural actions as a constant and repetitive need to ‘do’. Although not a formal diagnosis… [it] can lead to numerous psychological conditions, including… burnout.”

During online learning, my desire to constantly be productive would be accompanied by feelings of guilt if I was not working. I initially saw the newfound luxury of time as an opportunity to catch up on my studies, but before I knew it, I had fallen into a cycle of averaging 16-hour work days, seven days a week.

The “rise-and-grind” catchphrase – which a BBC article says encourages people to work, sleep and repeat, with little time for living outside of this – has become a mantra of toxic productivity culture and unfortunately became mine. 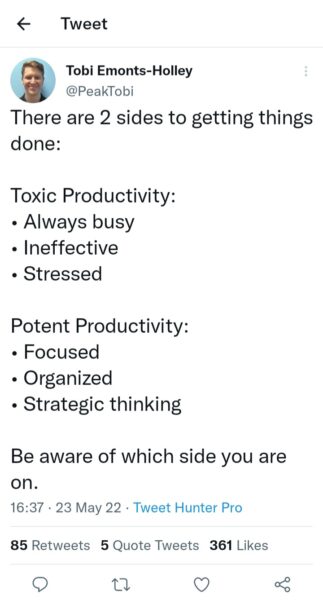 Screen grab of a tweet explaining the difference between ‘toxic’ and ‘potent’ productivity. Photo: Tannur Anders

In 2021, I viewed my final-year of the BCom politics, philosophy and economics degree as an opportunity to achieve good marks. I felt as though I was not working enough, and the number of items ticked off my to-do list became my self-determined measure of success.

Ticking off tasks gave me a metaphorical kick, and I would struggle to call it a day, remembering the boxes that had not been ticked. At that point I should have realised how productivity can become toxic.

When I started the honours degree in journalism and media studies in person this year, I was surprised that the drastic change from interacting with peers and lecturers from behind a screen, to mixing face-to-face, illustrated the importance of a work-life balance, and finally made me understand the difference between toxic and potent productivity.

I have come to understand the latter as being determined and focused, but not letting productivity define one’s success or self-worth.

Getting out from behind my home-desk and socialising with my peers has resulted in a better balance, creating definite lines between work and home, ensuring time spent with friends and family, and helping me make a conscious effort to stop and smell the metaphorical roses, when out and about on campus.

Keeping up to date with all that this busy world demands is important to keep one’s studies afloat, but only after realising how a piece of paper with unticked boxes can become toxic, did I understand that productivity cannot come at the expense of leading a balanced life.