The Wits Digital Dome will leave you seeing more than just stars.

The Wits Planetarium will undergo a three-phase transformation when the school of physics breaks ground on the university’s ‘digital dome’ in July 2022.

The 61-year-old Wits Planetarium currently uses analogue technology, such as the Zeiss projector, which projects approximately 8 000 stars as they appear in the sky. The digital dome will replace this projector with a high-performance computer server and place high-quality projectors around the ring of the Planetarium, which will then project onto the current dome. It will also see a new “explore-a-torium” foyer. 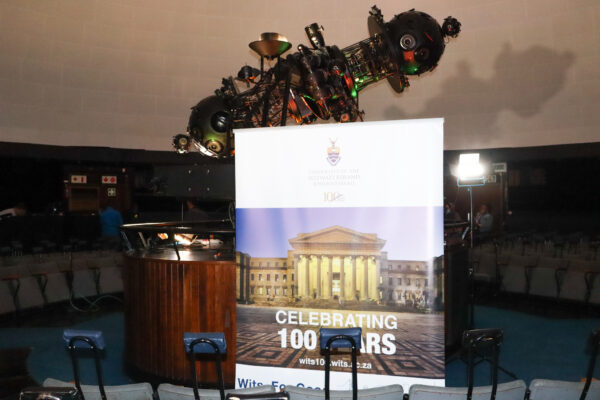 The Wits Planetarium’s Zeiss projector has parts close to 90-years-old and will soon be replaced with the digital dome’s technology. Photo: Tannur Anders

“The digital dome… also marks the transformation of this just being a Wits Planetarium to being a multi-disciplinary facility,” said Roger Deane (39), director of the Wits centre for astrophysics.

Most research fields in which Wits is a leader, are data-intensive, Deane said. “We really wanted to move in-step with this technological revolution that [has] happened,” said Deane. Once digitised, the dome will allow for the projection of any content, such as oceanic, earth, artificial intelligence and digital art observations.

Second-year astrophysics student, Sita Singh (19), said she likes the idea of a multi-disciplinary facility, but is worried about the upkeep.

The contents of the Planetarium will be cleared and the shell, which is a heritage building, will be all that stands on Wits’ homecoming weekend on September 2 to 4, 2022. The project plans to hold an event over the homecoming weekend and is one of the highest priority projects of the centenary celebrations, said Deane.

Wits has made previous attempts to transition to a digital dome, however, these were unfeasible due to a variety of factors, including financial viability, but the centenary year has offered the opportunity to see the project’s fruition.

The project is currently undergoing a fundraising drive, with Wits’ centenary acting as the main fundraising opportunity. Seed funding to the value of R20 million has been secured from Wits’ senior executive team, which has aided in the planning process, rewiring and refurbishing of the Planetarium.

The early 2000s saw planetariums converted into digital domes, with Cape Town being home of the Iziko Planetarium and Digital Dome (IPDD), launched in 2017. Wits has been in contact with the IPDD, said Ofentse Letebele (33) and Luzuko Dalasile (32), the IPDD multimedia designer and planetarium operator, respectively.

They said, “The public has shown a lot of excitement and enthusiasm for the planetarium [IPDD]. Most of our weekends and holidays have constantly been booked to full capacity… [as the public]… want to see new programmes on offer.” Wits can learn, and benefit, from this transformation.

The Wits Planetarium is the largest in sub-Saharan Africa, welcoming over 80 000 school learners annually, pre-pandemic. It anticipates that the wider range of content and increased number of shows will improve foot traffic.

The three phases of this project are independent, but will result in a single and integrated facility. The timeline of this project depends on the scale of funding acquired, but phase one is set to start on July 1, 2022 and its anticipated completion is the end of 2023.

The Planetarium has welcomed the Wits community and public to say goodbye to the Zeiss projector in a series of shows in June 2022. Free tickets for the Wits community can be reserved on Quicket, while the public can purchase tickets, which cost between R50 and R70, on Webticket.

FEATURED IMAGE: The Wits Planetarium will begin its transformation to a digital dome on July 1, 2022. Photo: Tannur Anders