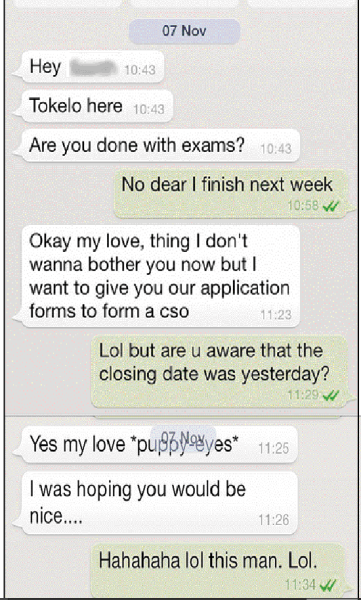 A new revelation has emerged this week in the battle waged by the Wits Economic Freedom Fighters (EFF) for official recognition.

However, a Whatsapp conversation seen by Wits Vuvuzela reveals that Wits EFF did, in fact, submit their application late.

The conversation shows Wits EFF student command member Tokelo Nhlapo asking a PYA member for help in submitting his organisation’s application late. The messages are dated November 7, 2013. The closing date for the club and society organisations (CSO) was November 6.

“Okay my love … I don’t wanna bother you but I want to give you our application forms to form a CSO,” asks Nhlapo in the message.

“Lol but are u aware that the closing date was yesterday?” responds the PYA member.

Nhlapo: “Yes my love *puppy eyes*. I was hoping you would be nice….”

Wits Vuvuzela was given screengrabs of the conversation by the PYA member. The PYA’s member cellphone was also examined to confirm the messages came from Nhlapo’s number.

When called for comment, Nhlapo questioned the authenticity of the Whatsapp conversation.

“How do you know it’s real? I can’t comment on every rumour!” he said, laughing before putting down the phone.

This revelation follows months of efforts by Wits EFF which culminated in a sit-in at Vice Chancellor Adam Habib’s office last week.

Following discussions with Wits EFF, Habib agreed to reopen club and society applications for all organisations who had been rejected.

When asked about the Whatsapp messages between Nhlapo and the PYA member, Habib said it was “unclear” whether Wits EFF had applied in November of last year. He reiterated that last week’s decision would stand and Wits EFF’s application would still be re-considered along with other potential applicants.

“They now have the chance to be recognised and take part in the full application process,” Habib said.

[pullquote]“Yes my love *puppy eyes*. I was hoping you would be nice….”[/pullquote]

“Wits is open to be a free space. We are being more lenient this year and relaxing the rule [relating to CSOs] because it is an election year,” he said.

Wits EFF chair Vuyani Pambo said he had “heard rumours about this message” but questioned the timing of its emergence.

“It’s release is convenient,” Pambo said. “Why would they only release this now? It could have come out at the time and ended all this long ago.”

Pambo added that the release of the Whatsapp conversation called into question the “true credibility” of the SRC.

“It’s easy to manipulate names and fake such messages,” he said.