Charges against 29 University of Cape Town #FeesMustFall protesters were dropped in court.

All charges against the 29 protesters arrested during last year’s #FeesMustFall protests at Parliament in Cape Town were withdrawn on Wednesday.

The 29 protesters appeared in the Cape Town Magistrate’s Court for their trial where prosecutor Nielan Chetty announced that the charges against them were to be dropped.

During the protests, 23 of the accused protesters were charged with attending an illegal gathering and public violence while the other six had an added charge of trespassing of a national key point.

Western Cape director of public prosecutions Rodney De Kock said in a statement that he found the protest to be a peaceful one and it would not be in the public interest to prosecute the protesters. 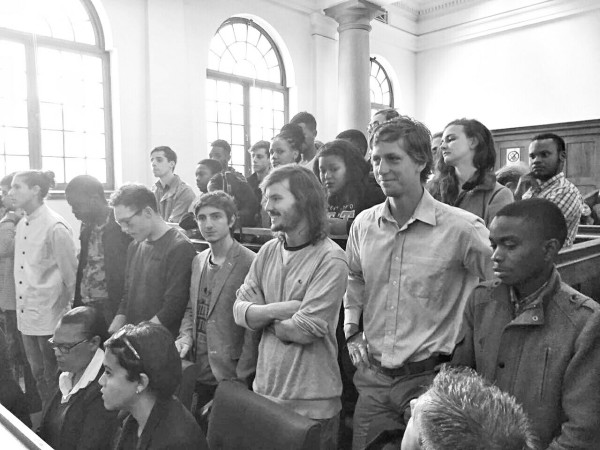 One of the 29 protesters, Ilan Price, an Applied Mathematics Honours student at the University of Cape Town (UCT), said the decision didn’t come as a huge shock to him. “Obviously there’s always a chance, but to be honest I did expect them to drop the charges,” he said.

“It sets an important precedent that peaceful protests are still protected. It protects future protests from prosecution,” said Price.

On the October protest, Price said that it is something that South Africa will probably see again. “This protest in particular was directed at the state because of the understanding that no progress was facilitated in the budget. It’s great because the protest was indicated [in the 2016 Budget Speech] but there isn’t talk about real numbers … It is not a free education budget.”