Members of #FeesMustFall are adamant that Wits SRC President Nompendulo  Mkhatshwa does not speak for the entire movement.

Leaders of the #FeesMustFall movement have distanced themselves from the statements made by Wits SRC President Nompendulo Mkhatshwa in the media recently.

This comes on the heels of an episode of current affairs show Checkpoint aired earlier this month in which Mkhatshwa threatened to leave the interview after she was faced with questions about the ANC. Active member of the Fees Must Fall movement Chumani Maxwele says it was incorrect for Checkpoint to engage Mkhatshwa on the issues of the movement. He says that it is reflective of Checkpoint’s limited knowledge of what is happening on the ground, “How can Checkpoint ask Nompendulo?” said Maxwele.

“Her analysis on Checkpoint lacked depth and complexity, she could not answer simple questions”, Maxwele told Wits Vuvuzela. 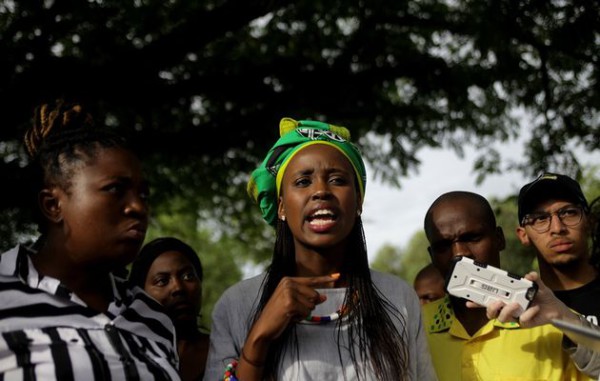 According to Maxwele, constituencies of the movement demand that Mkhatshwa clarify the capacity under which she speaks when addressing the media. “It’s a problem if she speaks as though she is speaking on behalf of the movement,” he said.

Maxwele denies the existence of divisions within the members of FeeMustFall movement, adding that those are rumours that have come out of laziness. “People in South Africa are mediocre, average; they are lazy to analyse issues”.

When asked about how the #FMF movement will operate in the months to come,  Maxwele said that free education is a resolution of the governing party: “We will protest until the policy is implemented.”