Picketers in support of Palestinian political prisoner’s demands make the call for the support of government officials.

The South African Free Palestinian Political Prisoners campaigners held a *Nakba Day picket at the Gauteng Provincial Legislature, on Monday, May 15, to hand over their memorandum to government officials to support Palestinians imprisoned by Israeli authorities.

The demonstrators were also on a 24-hour hunger strike in solidarity with the political prisoners’ open-ended hunger strike in effect since April 17, against their imprisonment and the state of Israeli prisons.

Anti-apartheid stalwart Laloo Chiba (86) who was imprisoned for 18 years at Robben Island also showed his solidarity to the Palestinian cause. “The Israeli government is stubborn, they are already establishing a military hospital because the civic hospitals have refused to force feed the hunger striking political prisoners,” he said.

Chiba also said that a hunger strike was one of the most peaceful methods of protest available to prisoners to carry on with the fight against the Israeli government. “I spent 18 years in prison. We have also embarked on a number of hunger strikes in pursuit of an improvement in prison conditions,” said Chiba. 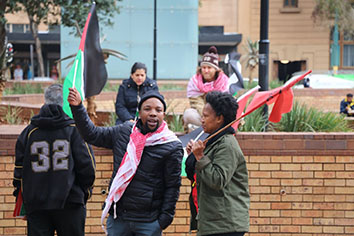 Kwara Kekana, board member of Boycott Divestment Sanctions (BDS) said, “It’s quite unheard of, this is a hunger strike, it goes beyond just saying that you are in support. People are actually putting their own bodies on the line for 24 hours.” She also said that the cause had been able to garner the support of public representatives such as Deputy President Cyril Ramaphosa and Minister of Communications, Ayanda Dlodlo.

Communications officer for the Ahmed Kathrada Foundation, Zaakirah Vadi, said that “The situation with the Palestinians is very similar to the situation in South Africa under apartheid, but it’s worse. The call is to stop the continued dehumanisation of Palestinians.” Vadi also said that it was both important and fair for South Africans to support Palestinians under what she described as their “current apartheid” because they had supported South African during apartheid.

The Nakba Day pickets were held across the country’s provincial legislatures.

* Nakba Day, meaning “Day of the Catastrophe”, is commemorated annually on May 15, the anniversary of the declaration of the state of Israel in 1948, following the forced removal of more than 750 000 Palestinians from their homes and the destruction of over 500 villages and towns. [Source: Al Jazeera]