The newly elected representative hopes to help speed up transformation at the university.

Members of the National Health, Education and Allied Workers Union (Nehawu) marched at Wits main campus to celebrate the appointment of one of their members to the Wits University management council.

Wits support staff from NEHAWU celebrate the announcement today that Tumishi Madihlaba will represent them on the Wits management council pic.twitter.com/FmNPEbuSU7

The march, which took place at Great Hall on September 1, was organised to celebrate the appointment of Tumishi Madihlaba. He was elected by other admin and support staff to the Wits University council on August 28.

According to Madihlaba, who works in IT support at the Wits school of architecture and planning, workers did not feel that they had been properly represented by the previous member of the council, Adele Underhay of the Administrative, Library and Technical Staff Association (Altsa).

Azwinndini Mutsharini, a security supervisor at campus control, echoed Madihlaba’s sentiments saying that, “Previously we had somebody who represented everybody, but was not making it better for the disadvantaged people, especially black people. Now that we had the opportunity to vote and Tumishi Madihlaba won, we are happy that he will do what he promised us. He will take all our grievances to the council.” 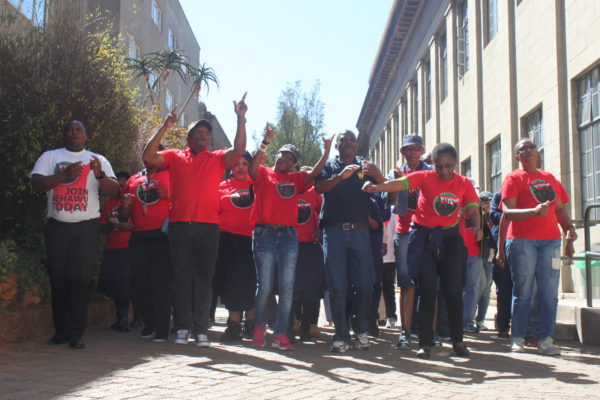 Nehawu-affiliated workers from Wits march to celebrate the appointment of their member to the Wits management council.

Madihlaba told Wits Vuvuzela that membership of the council is extremely important, as it is the university’s highest decision-making body. “We feel the reason we are being neglected is because transformation hasn’t happened to a level that is acceptable, so our voice is that Wits must start subscribing to the national targets of transformation, and the only way to approach that is to be represented at council,” he said.

“If you have people who are disadvantaged represented within such structures, you are likely going to achieve transformation sooner,” added Madihlaba.

Humanities Faculty Registrar, Julie Poyser, agreed with Madihlaba, that representation is very important. “Often professional and administrative staff do feel sometimes left out, especially seeing as though most of the conversations are around academia as opposed to the administrative support,” she said.

Poyser, who is a member of Altsa, said she was confident that Madishaba would represent all individuals regardless of their union allegiances. “I have absolute confidence that he will be able to run the chair and I don’t think we should have any concerns,” said Poyser.

Madihlaba will represent 3 700 Wits staff members during his four-year term as a representative on the council.