The lives of 30 South African women are featured in a new children’s book, Her Story: Umlando Wakhe.

Authored by Baba-Tamana Gqubule, Natasha Allie and Thandi Matthews, the book which has been published in English and isiZulu and is aimed at 7-12 year olds, tells the life stories of South African women across the generations to inspire the younger generation. Actress Terry Pheto, footballer Portia Modise, journalist Ferial Haffajee and ballet dancer Kitty Phetla are profiled in the book.

Gqubule, Allie and Matthews spoke at the launch about process of writing as a collective which presented its own set of challenges.

“Writing as a collective who don’t have the same style of writing is very difficult, even though fundamentally we have the same core belief in the book and the reasons why we were writing it,” sad Gqubule.

Allie added that the book was inspired by a lack of stories written about women in South Africa. “We were just friends sitting and chatting one day about this huge gap in the market. Well, stories we wanted when we were little, stories we didn’t have but learnt as we were older,” she said. 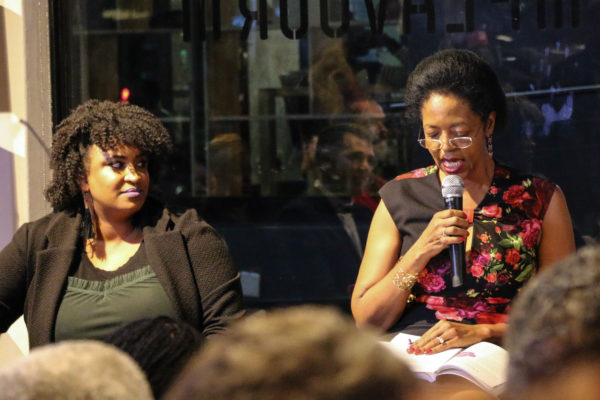 Publisher of Khaloza Books, Fébé Potgieter-Gqubule,said the lack of similar books for young women is what inpired Her Story. “Their (authors) idea was that women’s stories are hidden and particularly black women. And they wanted to do a book that doesn’t speak to older women but speaks to younger girls about the kind of role models that they should have, that they should aspire to.”

Potgieter-Gqubule highlighted some of the challenges of getting the book published in Isizulu. “The philosophy of Khaloza Books is that we will always publish in one other African language besides English. And what we found is the difficulty of people saying ‘Oh, but the book won’t sell if it’s in an African language’, she said.

“Amazon books for example said they only publish in English and Afrikaans and we said we’re not going to compromise,” she added.

Second-year BSc Civil Engineering student at Wits, Ruvimbo Mutasa, who drew the illustrations of Terry Pheto and Kitty Phetla in the book, said that “being able to draw wonderful women like these is unexplainable. The women in this book are not just extraordinary, but they are women who stood firmly for what they believed in.”

[WATTCH]: The authors talk about how they put the book together. Kitty Phetla also reads her story from the book.