A play titled ‘Dipuo: Ngoana wa Tsumo’ will be showcased at the Wits Theatre on Friday, October 4, 2019.

The play is based on a true story of a boy named Dipuo, who stays with his father Pieter, the grounds-man at a watermelon farm that is experiencing drought in Orange Farm.

One of the remarkable aspects of the show is Moloi’s ability to adapt to two different male characters throughout the performance, as she also plays sidekick to Thuso, who is a government official. 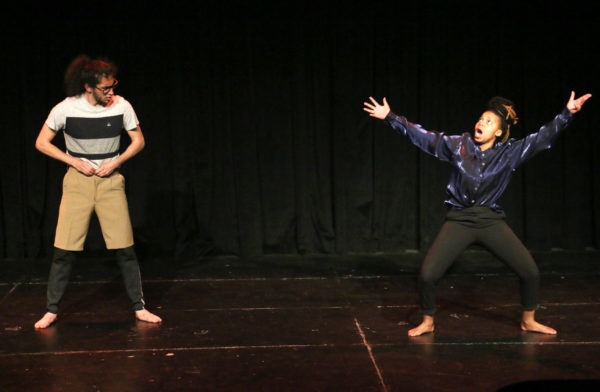 “Dipuo” has the ability to bring stories to life and the story captures his life with his father. I love playing the character,” Moloi told Wits Vuvuzela.

The sadness that Dipuo feels is revealed in an emotional scene where he sadly asks Pieter, “Where is mommy and when is she coming back?”

Dipuo then falls asleep during the conversation, which leaves a look on Pieter’s face where it seems he wishes he could provide for Dipuo’s longing for a mother’s love.

Another outstanding scene was the phrase used to describe the water shortage, using the colour of the watermelon.

“Green is what the country needs and red is what we can supply,” said Owethu Ndaza, first-year BA general, who portrays the character of Mokoena, co-owner of the farm, during the perfomance.

The closeness of a father-son relationship is tested with the arrival of a seemingly drunk Bra Biza, who is Pieter’s estranged brother. Looking for work, he is “known for causing havoc wherever he goes,” said Ayanda Tomile, first-year, BA theatre and performance student plays the role of Bra Biza.

Dipuo’s paternity comes into question when information comes to light that Dipuo’s mother, who abandoned the family, had an affair with a Nigerian man when Dipuo was conceived.

The outstanding performance of performers to adapt to different scenes while still capturing the attention of audiences keeps the narrative alive.

The play is made possible by Blvck, which is a collaborative theatre collective, founded by Dlamini, Lynch and producer Leboto Moshoeshoe.

“Originally debuted as part of the 2016 RAPS festival, the performance marked the second round of the show, but the first of the Blvck adaptation,” said Martin Grendele who is the administrator behind the play.

Other characters include Theanus, the owner of the farm and Wian who is Dipuo’s best friend, both portrayed by a second-year BSc computer sciences student, Tudor Grants-Peicu.

“We urge people to come and watch. The greatness of theatre is how every performance is never the same, and this is a story that needs to be seen,” Grendele added.