Witsie’s flame so bright, John Cena can see it

“This will open a lot of doors and at the same time generate pressure but we are ready and Sho Madjozi and I have been working hard to make sure we have more music on the way.” 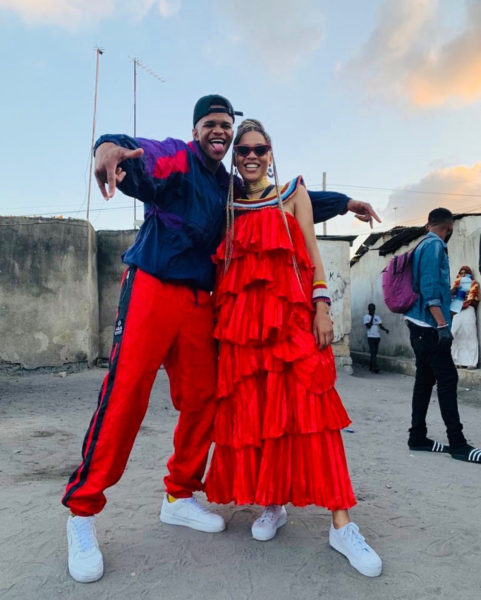 A vacuum teal room, as if to keep the talent from escaping and a mirrored floor to reflect on the artists’ musical journey.

In the centre, South African musical talent, Sho Madjozi, face glistening, pink braids over her face, and a dress with different shades of pink and feathers. A sight similar to a flamingo – a totem of desire, joy, happiness, and power.

The beat comes on with a bass so intense that if you look close enough, you can see the ground shake. Madjozi performs a fusion of South African house music, kwaito and techno, served with a side of ‘you can’t see me’ – world famous wrestler John Cena’s tagline. John Cena is on The Colors Show, but the heavyweight champion is nowhere to be seen.

John Cena is the name of the song Madjozi is performing. As the song reaches the final hook, the beat plays softer and Madjozi, doing the Thuso Phala, goes “Ah Tboy da Flame, Deejay Exit, it’s too much!”

The Colors Show is a music platform by Colors x Studios that publishes music from different artists around the globe with a unique sound to showcase their talent on a global scale. With more than three-and-a-half million subscribers on YouTube and views over 100-million on their channel, Colors published John Cena over a month ago and the song has gained global traction, reaching about four million views, higher than the number of subscribers.

Third-year bachelor of medicine and surgery student, Thabo Moagi, is the “Tboy da Flame” Sho Madjozi is referring to at the end of the Colors video. He produced the John Cena beat.

“I had no idea that [John Cena] would end up on Colors. I am just grateful for the opportunity Sho has given me,” said the 22-year-old Moagi about the beat he produced with Deejay Exit, who also features on multiple songs produced by the Witsie. Moagi has been a producer for Sho Madjozi for about six months.

Moagi described the production of the beat as spontaneous. “The John Cena beat is just another example of the type of gqom music we produce. I like to make it bang harder by always layering my kicks with snares and claps. Then the toms (a tall, narrow drum) give it a boost and more aggressive gqom feel,” Moagi told Wits Vuvuzela.

“Initially, I used to just submit my beats to [Sho Madjozi], then she started giving me more opportunities such as traveling with her to do more work, and eventually, one thing led to another and here we are,” said Moagi, also 22.

Kelechi “Classic Keys” Nwachukwu, a second-year bachelor of medicine and surgery student and producer of visual content for Moagi, said, “Tboy da Flame is a growing name in the music industry and he has worked alongside many great artists. He has matured and is continually perfecting his sound. He is always practicing new beats and concepts and melodies.

“He has definitely grown in stature in terms of producing and creating music. Since his break out song uBaba kaDuduzane, which secured about two million views on You Tube, you can hear the progression to songs with more depth in terms of how they sound sonically and I believe that’s the making of a great artist,” Nwachukwu said.

Appearing on Colors has extended Sho Madjozi’s global reach. Superstars such as Missy Elliot have applauded the 27-year-old, whose real name is Maya Wagerif and the #JohnCenaChallenge (a dance and lyrical challenge about the song) was conceived. Many people around the world including dance companies such as the DWP Academy, local dancer and actress Bontle Modiselle participated in the challenge during her monthly dance classes with over 100 attendees.

Cena has applauded the song multiple times on his social media. The retired wrestler appeared on the Ellen DeGeneres Show on Monday, September 30, where he was challenged by (So You Think You Can Dance America, season seven runner-up) Stephen “tWitch” Boss to dance to the song as part of the #JohnCenaChallenge trending worldwide.

Moagi told Wits Vuvuzela, “[Being published on Colors] will open a lot of doors and at the same time generate pressure but we are ready, and Sho Madjozi and I have been working hard to make sure we have more music on the way. I cannot wait for it to be released.

“I am looking forward to completing my school work. I used to struggle with time management but I do my best to ensure that I never get left behind on my school work. The work is full of opportunities and one has not lived until they fulfil their purpose in life,” the health sciences student said.