The South African minister of higher education has announced that all universities will extend their registration periods to allow first-time, first-year NSFAS students to register. 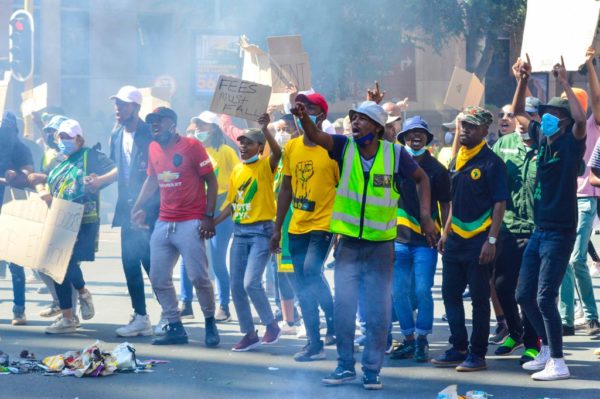 Student demonstrators block off the intersection of Jorissen and Bertha streets using burning tyres on Wednesday, March 10, before rubber bullets and stun grenades were used by police to disperse the crowd. Photo: Alfonso Nqunjana.

The Wits fee protests continued on Friday, March 12, and spread to campuses around the county, despite an announcement by the minister of higher education and training (DHET), Dr Blade Nzimande that registration at all universities will be extended by another two weeks. Nzimande made the announcement at a press briefing on Thursday, March 11. The extension is meant to afford first-time, first year students more time to secure funding for registration.

“We have agreed with all our universities, that they will extend their registration period for first-time entering students for two more weeks, which means for this week and next week so that none of the first-time entering students are disadvantaged by the delay in the finalisation of this matter,” said Nzimande after he had briefed the Cabinet on the funding crisis. Following the briefing, government announced that it would bolster NSFAS by an additional R7-billion to assist with the crisis.

Nzimande said that other arrangements are being made to allow  students who are not NSFAS-funded to register. “Some of the demands that are being received by government and university relate to the debt of students who may not be funded by NSFAS but who are struggling to register and who are doing well academically. In some instances students have made arrangements with universities by signing an AOD (acknowledgment of debt), in this regard I will be engaging with universities to ensure that final year students who are on track to graduate and are doing well are allowed to register through the AOD,” the minister said.

The AOD at Wits can only be signed by students owing the University less than R10 000. Those who owe more than R10 000 are expected to pay 50% of their debt upfront before being allowed to register.

“You sign an AOD and you’re allowed to register but what happened differently in 2021, [the university] said only students owing R10 000 and downwards must be allowed to register,” said Sthembiso Dabula, deputy president of the Wits SRC, speaking to Jacaranda FM.

Death of a bystander

In a deadly turn of events on the third day of the protests, bystander Mthokozisi Ntumba died after being shot in the chest, allegedly by police on Wednesday, March 10. According to reports, the 35-year-old was leaving his doctor’s rooms on Bertha street when he was shot as police opened fire on students.

Students from Wits and UJ, gathered for an overnight vigil on Thursday, March 11, at the spot where Ntumba lost his life. The Independent Police Investigative Directorate (IPID) is currently conducting an investigation to determine the circumstances that led to the death of Ntumba.

On Friday morning, protesters were greeted by news of the suspension of Wits SRC Treasurer General, Kanakana Mudazanani. “[Kanakana] has been officially suspended for 45 days by Wits University and barred access to all university campuses. One of the conditions to the suspension is that he is not allowed to congregate with more than four people,” read a tweet by Wits SRC member, Bonga Makhanya, although Wits Vuvuzela has not been able to confirm this with the institution.

By Friday afternoon, the Wits protesters had once again gathered in Braamfontein, bringing traffic to standstill.