Lesego Mpumelelo Nzuza (21), known as  “Eggboy” on the streets of Braamfontein, began selling raw egg trays on De Korte street since the first week of February 2021.

The third-year BA history and international relations student from Wits, recognised a need for change when he observed several students in institutions of higher learning routinely go to bed hungry. Nzuza felt this issue was “a skeleton in universities’ closets that nobody talks about.”

After personally experiencing hunger and being ashamed of asking people for help, along with witnessing close friends and fellow students struggling to afford to buy food, Nzuza began selling a tray of 30 eggs for R50 each. 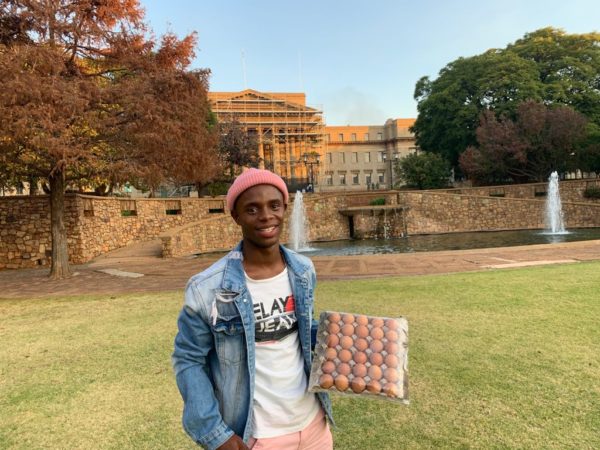 He told Wits Vuvuzela: “The reason I decided to sell eggs is because they are quick and easy to cook.

You can have them for breakfast and lunch, which saves time and electricity for students living in residences [with prepaid electricity].”

Nzuza, is now aspiring to become a poultry farmer, he believes that he has the personality and temperament to make it in the industry. According to Nzuza, building a successful business requires you to be able to “work with different personalities [and] understand customers’ needs and wants”.

If students are experiencing financial difficulties at home or bursaries delaying allowances, they can get a tray of eggs on credit.

Most of his marketing to students in particular is done on Instagram. “[That] is where my target market is,” Nzuza said. He currently does not have any business partners. However, his grandmother and uncle have been supportive of his business venture, and his friends assist with his social media marketing and posters.

Despite his business not being registered yet, he has made R650 to R1 000 monthly. Nzuza said that he has not had unsold eggs for more than three days since he began being supplied by Kliptown Eggs Wholesale. He is hoping to grow his hustle into a business by investing in a poultry farm that produces both meat and eggs for consumers.