#JusticeForQueerSA has no cause for celebration

Queer lives are at stake across the country and activists are saying ‘enough is enough’.

Over the past two and a half months, the spike of violent crimes directed at the LGBTIQA+ community continues to be a cause for concern. Now, concerned activists are looking for a change in policy to help fight this battle.

The letter addressed several pressing issues faced by the LGBTIQA+ community like the ‘Prevention and Combating of Hate Crimes and Hate Speech Bill,’ which is yet to be enacted as there have been delays from the Constitutional Court.

Various LGBTIQA+ civil society organisation’s joined forces under the banner #JusticeForQueerSA: No Cause for Celebration, to commemorate the lives of those they have lost and to address issues stated in the letter. 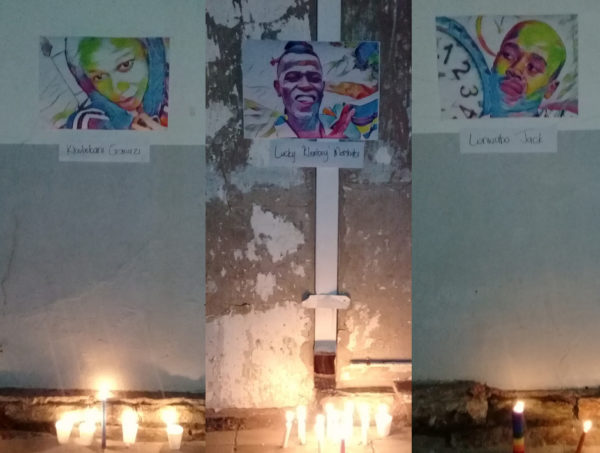 The vigil was at Constitution Hill on May 26, 2021 saw different subgroups of the queer community standing in solidarity, all draped in various shades of black and purple. The day also marked 21 days since the letter had been sent to the department of justice, with no reply at the time of the event.

During the vigil, Iranti’s Ntuthuzo Ndzomo said, “This moment has proven to us that the democracy South Africa keeps on claiming is not for all of us.” He added, “We are also meant to be protected by the same constitution that is protecting every other South African.”

The letter specifically appeals to the DOJ and CD to hold SAPS accountable for the inaction of the Provincial Task Team and the Rapid Response Team, which are meant to address hate crimes.

The chairperson of Activate Wits, Sihle Mazibu, said that they are not meeting here for a happy reason. “All we do is meet up to talk about our pain and never our joy… all I feel is rage, pain and fear.”

The vice-chairperson of Activate Wits, Penipeni Tshabalala, said: “We need to be confrontational with the government and demand justice for the queer lives lost.”

At the time of writing, the DOJ and CD were yet to respond to the National LGBTIQA+ sector’s letter.

FEATURED IMAGE: No cause for celebration banner and LGBTIQA+ flags. Photo: Sinenhlanhla Sibisi.