WITH INFOGRAPHIC: A year after CMJAH fire

April 16, 2022, marks a full year since a devastating fire erupted in the dispenser storage room at the Charlotte Maxeke Johannesburg Academic Hospital (CMJAH). Learning and teaching at the Wits faculty of health sciences continues to be adversely affected as renovations take place at a snail’s pace.

The fire ravaged at least two blocks of the hospital building, including the staff and visitors parking, engulfing essential PPE and other resources worth R40 million. The psychiatric ward and the emergency unit, which are sections essential for learning, are still cordoned off, which has affected students who are practicing in these disciplines. 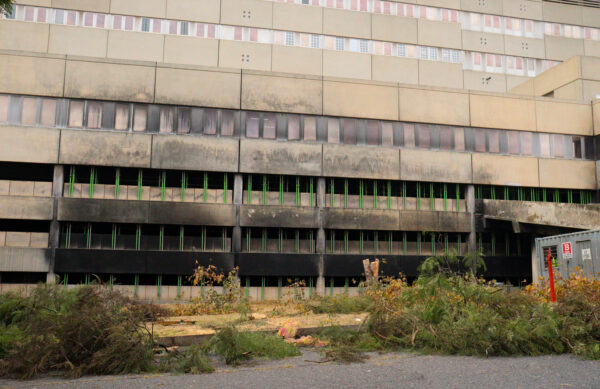 Soot still paints the northern wing of the hospital building as assessments are underway, a year after the fire. Photo: Keamogetswe Matlala

Fifth-year medical student, Musa Ndaba who was deployed to the Helen Joseph Hospital said that patients were sent to neighbouring facilities, thereby decreasing the pool of diverse patients’ cases that could be seen at a teaching hospital such as CMJAH.


School of clinical medicine head, Daynia Ballot confirmed that the effects of the fire are still felt to date as it “impacts negatively on our patient care and also training of new healthcare professionals”.

Ballot said due to the redeployment of students and healthcare professionals to other regional hospitals, “staff morale has dropped” as the burden of student intake and reallocation has resulted in larger classes and clinical groups at these hospitals.

Ballot added that: “teaching and proper patient care is really difficult in these circumstances.”

Although some sections such as the oncology unit reopened last year, promises to reopen other affected units have been marred by controversy.

According to recent news reports, the reopening of the emergency unit and psychiatric ward has been delayed by safety compliance and financial issues, vandalism as well as the theft of copper pipes and electrical cables.

In February, speaking to radio 702’s John Palman, Thabo Masebe, the health department’s acting director-general, revealed that the cause of the fire was still unknown. In the same interview, Masebe said that the department of health and that of infrastructure and development could not agree on the scope or budget required to get the hospital up and running again. This sparked protests from staff members working at neighboring hospitals over the overwhelming influx of patients while they have limited resources and capacity.

This week, Wits Vuvuzela was told by a contractor who requested to stay anonymous that he was deployed to the building to conduct assessments on the building over the next few days.

This is after the Health Minister, Joe Phaahla announced last month that his department will oversee the R100 million project. Reconstruction is expected to be finalised by the end of 2023, a more hopeful date than the initial 2027 projection.