STUDENTS GATHERED at the Senate House concourse on Tuesday afternoon to witness the unveiling of Solomon Mahlangu House’s plaque but were surprised to find a no show.

To further confuse students, no communication was issued to inform the general Wits community why the event, scheduled by the office of Vice-Principal Dr Tawana Kupe, did not take place.

Palesa Hlongwane, a third-year BSc student told Wits Vuvuzela that, “I was really looking forward to the official renaming of Senate House to Solomon [Mahlangu House]. I was shocked and disappointed when I got to Senate House to discover that nothing was happening,” she said.

Arthur Nkosi, a fourth-year social work student shared similar sentiments saying that, “The event was truly anticipated by students. I mean, during the #FeesMustFall protests all we were singing was “Solomon! Solomon!” To just cancel the event was unfair,” he said. 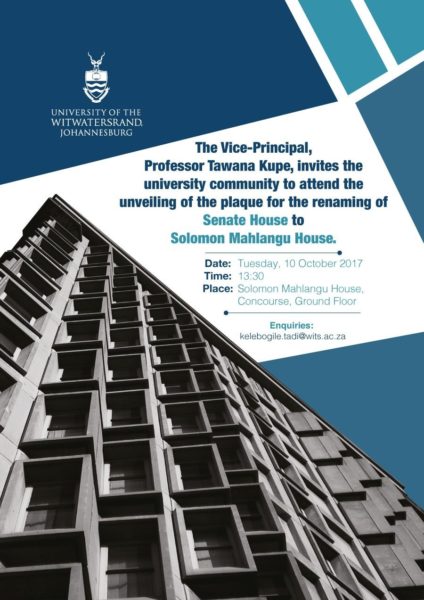 Wits Vuvuzela made several attempts to get an official comment from the university, however, there had been no response from either senior communications officer Buhle Zuma or Kupe at the time of going to print. The university had not issued a statement either.

Student Representative Council (SRC) president David Manabile told Wits Vuvuzela that the unveiling had been postponed, however, no new date had been provided. “The decision to cancel the unveiling was made by the university council, and the communication was sent to me last week,” said Manabile on Thursday.

The call to rename Senate House to Solomon Mahlangu was made by the SRC in 2015 during the #FeesMustFall protests.

The proposal was subsequently approved by the Wits Naming Committee, and the announcement was made on April 6, 2016, the 37th anniversary of Solomon Mahlangu’s execution.

April 26, 2017 Senate House to be renamed in honour of Solomon Mahlangu