WhatsApp to stop working for some

END_OF_DOCUMENT_TOKEN_TO_BE_REPLACED

In their shoes: #FunkItImWalking wants to decriminalise sex work

High-heeled supporters and sex workers joined the #FunkItImWalking march to draw attention to their cause. END_OF_DOCUMENT_TOKEN_TO_BE_REPLACED

The private and public sectors are collaborating on a new campaign to eradicate potholes from Johannesburg’s roads.

END_OF_DOCUMENT_TOKEN_TO_BE_REPLACED

The close friends behind Elewa Jewellery, an affordable line fit for students’ pockets.

END_OF_DOCUMENT_TOKEN_TO_BE_REPLACED

A religious reawakening was needed after I distanced myself from Catholicism, but I received so much more from Ramadan.

This year I decided to observe Ramadan to seek spiritual clarity to help me cope with the trauma of sexual assault, but after the second week I was struggling as habits of an eating disorder I thought was in remission started to reappear.

I had a Christian upbringing and always relied on a higher power to rescue me when at my lowest. I attended a Catholic school from grade six, but by my matric year, learning about existentialism in drama class, I became disillusioned.

I pondered the purpose of all my actions and reflected on life events and experiences that had caused me much pain. Bullying, homophobia and racism at school caused a rift between me and Catholicism. Added to this was the Roman Catholic Church’s disapproval of me and those I love: Myself as a queer woman, and family members and friends who identify as LGBTQIA+. It contradicted a belief my Catholic father had taught me, namely kindness and love for everyone, no matter who they are.

Lent was something I had partaken of since the age of 11, so Ramadan was easy enough to wrap my head around. Ramadan is the ninth month of the Islamic calendar, the holiest of months and a compulsory act of the Muslim faith. It is a month of prayer, reflection and fasting to create a stronger relationship with Allah.

Muslims must fast between sunrise and sunset. They have a meal before dawn (Suhoor or Sehri) and break their fast after sunset (Iftar or Fitoor). I began Ramadan with complete willingness to see the month-long fasting through. I explored the ins and outs, such as the times for Sehri and Iftar, as they change daily according to the sun. I needed to plan meals for both. I was eager to cultivate a relationship with a higher power. Christianity did not work for me; maybe Islam was my calling. At the beginning, the hardest part was waking early enough to pray and eat. Thereafter it was coping with the return of bulimia nervosa.

If you ask anyone in my life to describe me, an opinion that would come up is ‘‘control freak’’. I was used to having control. It made me feel safe and secure. The feeling of having no control during the sexual assault reintroduced the need for it into every aspect of my life. This retriggered a toxic relationship with food and hunger.  Being able to control when I was hungry and when I was full felt like reclaiming the power I had lost. I did not realise right away that the feeling of satisfaction with hunger was not the spiritual awakening I desperately needed, but rather the reappearance of a demon.

Bulimia had made me obsessed with ensuring nobody knew what was happening, and when I started to show side effects such as yellowing finger nails and teeth, dry skin or red eyes, I knew I had to take a break. By the second week of Ramadan, my skin was dry and I was more exhausted than the usual university student, yet I still did not realise bulimia had reared its ugly head again.

Menstruation releases a woman temporarily from religious duties such as prayers and fasting, and requires them to make up the missed days of fasting before the next Ramadan. The beginning of my menstrual cycle could not have come at a better time; I thought I would have some days to rest from fasting and not have to wake up early. After this period of pause I found it difficult to get back on the wagon. I began lying to my family about fasting, hoarding food in my bedroom and never really knowing if I was hungry or not.

Frustrated and disappointed that I was unable to stay committed during Ramadan, I punished myself by binging and purging, followed by lying and secrecy. Despite the resurfacing of negative feelings towards food, I am grateful for my two weeks of Ramadan. I began the month of fasting hoping to cope with trauma and depression, and while I believe myself far from “recovery”, I feel it has set me on the right path. I have learned the value of discipline, kindness and being grateful for what I have.

I think I needed to fail at observing Ramadan to see how much I need to put into healing; that religion and faith are not a quick fix. I am now committed to really healing and forgiving myself. I am uncertain of the steps to take to get where I want to be, but I know it is up to me.

Amsterdam based note sharing platform StuDocu is providing access to course notes across the world.

Wits university has “almost 3,500 active accounts”, on a new university-level course material sharing application. This is according to StuDocu marketing and communications manager, Martine Peeters. StuDocu, which launched in 2013, is, according to the website, a platform for students to share their study material with other students around the world.

Peeters told Wits Vuvuzela that there are users from 76 South African tertiary institutions and 12,5 million users worldwide. Four Dutch engineering students who wanted to exchange study material to improve their results created the platform. Users can access academic material specific to their institution, and their specific courses at those institutions, as well as upload their own notes.

Those who upload material are compensated for them if the platform approves the material. Users upload their material to the courses, the documents are then analysed and “within 60 seconds we give you an offer for your documents” according to the StuDocu website.

Wits Vuvuzela asked five Wits university students from varying faculties about the value of StuDocu. Amirah Lamidi, a humanities student, found the ability to make money from the platform to be an interesting feature, “[Especially] during [covid-19], many people need extra sources of income”, she says. Science student Patricia Zongololo added; “many people spend hours making pretty notes that end up in the rubbish. Turning that into a money making vehicle can be very advantageous.”

However, StuDocu does not accept lecture slides, books, online content and copyright protected documents due to their strict policies. An automatic tool checks uploaded documents to ensure they are not infringing on any copyrights and not plagiarised. Users of the platform can enter a take-down request for documents they suspect of copyright infringement and “We will remove the document (s) from our platform” adds Peeters. 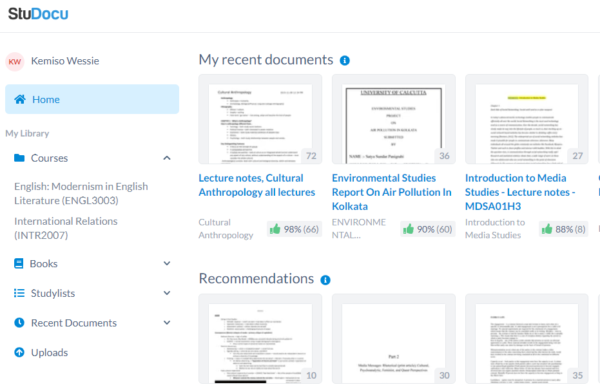 Screenshot of the home page of a free StuDocu profile Photo: Kemiso Wessie

Commerce student, Anastasia Lungu, said she would use StuDoc because of the credibility of notes. However, another commerce student, Jabulani Mdluli, noted that although access to international material is great, “It may be of little value if testing requirements/standards are different.” When asked if he would be most or least likely to use the platform, Luke Nicholas, a fourth-year medicine student, mentioned that “I [am] very traditional with my resources and enjoy hard copy books, textbooks etc. but I would definitely be open to trying it considering [that] I have many of my own notes and resources to share as well.”

The start-up witnessed an increase in the platform’s use since covid-19 lockdowns. “Education was lagging behind significantly in the adoption of technology and [because of] Covid, this gap has been bridged a bit” CEO Marnix Broer told European technology media source Silicon Canals in August 2020. Zongololo said that despite efforts made by lecturers amidst remote learning, it has “Pushed students to seek additional information elsewhere. A platform like this could be the answer to that problem.” 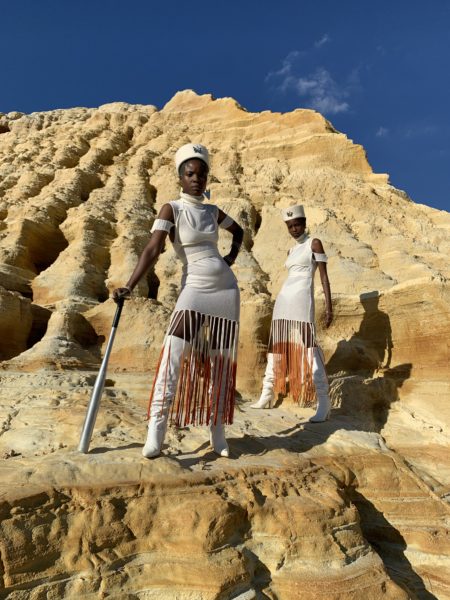